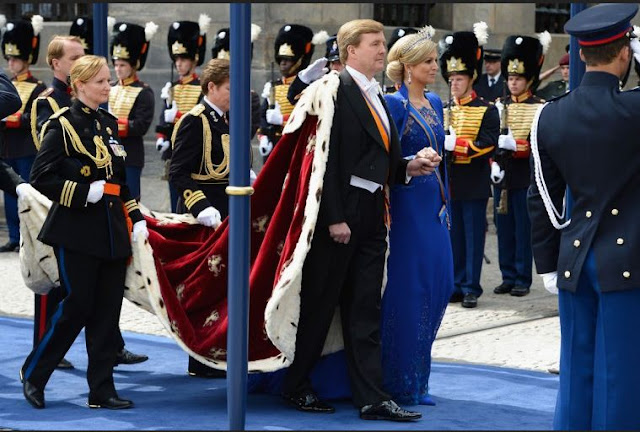 Netherlands’ Willem-Alexander became Europe’s youngest monarch at 46 after his mother, Queen Beatrix, 75, abdicated.
The country welcomed the avowedly 21st-century king with a massive, orange-hued party.
The abdication and investiture was also honoured and celebrated by the Dutch worldwide, including in Nairobi.
Willem-Alexander has a history of engagement with Kenya. He worked as a pilot for Kenya Wildlife Service in 1986 and his most recent visit to Kenya was in November and December last year when he chaired the UN Secretary-General’s Advisory Board on Water and Sanitation meeting in Nairobi.
On that occasion, the Prince of Orange, as a patron of Amref, also visited Amref projects in Magadi and Oloitokitok. The projects relate to water and sanitation, and health for young women.
Beatrix shed tears before signing the act of abdication at the Royal Palace in Amsterdam, witnessed by Willem-Alexander, his Argentine-born Queen Maxima, 41, and members of the government.
A cry went up from the 25,000 crowd in the Dam, the main square opposite the palace where the signing was shown on giant screens.
Willem-Alexander, Maxima and Beatrix appeared before the crowds on the palace balcony, bedecked in roses and oranges.
“I’m happy and grateful to present you your new King Willem-Alexander,” Beatrix said.
The new king expressed intense gratitude to his mother for “33 touching and inspiring years” and thanked the Dutch people for their support and trust, and then led in a rendition of the national anthem.
Police escorted two republicans from in front of the royal palace after they brandished a large sign reading: “I’m not a subject”.
They were escorted to an authorised protest area, but police later apologised for detaining the anti-monarchists.
The king was to head with his queen and their three daughters, including their eldest, now Princess of Orange Catharina-Amalia, 9, to the neighbouring Nieuwe Kerk (New Church) to be sworn in.
While already king, Willem-Alexander must also be sworn in rather than crowned — because church and royalty are separated in the Netherlands — at a ceremony before a joint session of the houses of parliament in the deconsecrated Nieuwe Kerk.
A who’s who of royals-in-waiting, including Britain’s Prince Charles, Spain’s Prince Felipe and Japan’s Prince Naruhito and his wife, Crown Princess Masako, attended the ceremony.

Princess Masako is on her first trip abroad in nearly seven years, while Prince Charles also attended Beatrix’s enthronement in 1980.

Willem-Alexander is the first Dutch king since 1890 and the first of a new wave of relatively youthful European monarchs.
“Beatrix has been queen for 33 years, our queen,” Ruud, 49, said on the Dam after the abdication, tears in his eyes. “She was a stabilising factor and a symbol of our country. It’s sad to see her go after all these years; a page in our collective history is turning.”
Amsterdam’s population is set to double with around a million visitors flooding the city’s streets and canals to mark the abdication and enthronement.
Some people spent the night on Amsterdam’s main square to ensure a good view of the royal balcony, while party-goers from across the Netherlands descended on the capital, many carrying Dutch flags.
Over 10,000 security officers were deployed in Amsterdam, with police saying they had arrested 70 people since Monday.
Authorities have closed off Amsterdam airspace to civilian aircraft for three days and issued strict orders prohibiting the use of drones, with rooftop snipers keeping a watchful eye.
The monarchy is popular in the Netherlands, but some question the cost of the royal household and republicans are seeking to get the king’s 825,000 euro (Sh83 million) tax-free salary reduced.
Queen Maxima attended a gala dinner at the Rijksmuseum on Monday, wearing a Valentino dress that she had previously worn in 2008. Dutch media said that this was a deliberate move to reduce the royal family’s image of extravagance.

Loading...
University of Nairobi Student Suspended For 1000 Days For Swearing at Dean of Students, Fr. Wamugunda < Previous
After Mistreating Harambee Starts, Nigeria Extends Pathetic Hospitality To Kenya Film Makers At Movie Awards Next >
Recommended stories you may like: