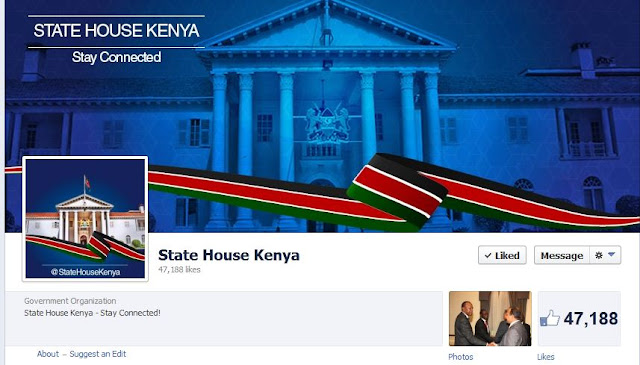 One of Jubilee’s campaign slogan was ‘The Digital Team’. This was used to refer to the youthful nature of the then presidential candidate Uhuru Kenyatta, his deputy William Ruto and their billboard mates Najib Balala and Charity Ngilu.

The president may already have the most followed Facebook page this side of Africa, but he has not stopped there. A day before he officially took office, State House joined Facebook and Twitter. The presidency was lucky to find matching names both on Facebook and Twitter. Somehow, @StateHouseKenya and Facebook.com/StateHouseKenya were available, and they are now the official accounts of State House Nairobi.

The administrator of the two pages is doing a marvelous job informing Kenyans on what is happening at the house on the hill. This week has been particularly busy with Tuesday been exceptional, due to the high influx of visitors.
Once in a while there is a spelling mistake, like when Sri Lankan special envoy was referred to as Mr. Guna Wardena instead of Gitanjana Gunawardena, but the admin was quick to apologize.

Now, this is really something.
© nairobiwire.com

Loading...
This Is Museveni’s Sh50 Million Armoured Limousine.. The One He Brought To Kasarani < Previous
Gospel Artist Ringtone Ecstatic After Entering State House Next >
Recommended stories you may like:

All That’s Trending in Nairobi Today
Loading...
The Latest