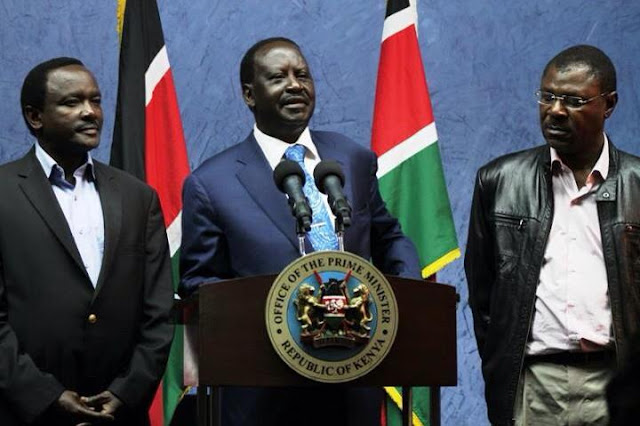 You will recall that on 9th March 2013, I issued a statement on the conduct of the elections which hadjust been concluded.I expressed my deep gratitude to all Kenyans who had turned out massively to exercise their democratic rights to vote and elect their leaders.

I however expressed my dismay that contrary to the expectations of Kenyans, we witnessed the failure of virtually every instrument the IEBC had deployed to ensure free, fair and transparent elections.

I outlined such failures, with concrete examples of the anomalies that all of us witnessed. It was clear that the constitutionally sanctioned process of electing new leaders had been thwarted again by another tainted election.

Democracy was on trial in Kenya.But that has not dented my commitment to constitutionalism and the rule of law.Enforcing the spirit and letter of the
constitution remains the only sure way to peace and prosperity for our young democracy.

My decision to file a petition in the Supreme Court to challenge the validity of the election was a testament of my faith in the independence of our judiciary.We did so for the sake of our democracy and for the sake of allKenyans who wanted to exercise their constitutional right to elect their leaders through free and fair election.

We were joined in this endeavour by Africog, which separately filed a petition seeking to nullify the fourth of March Presidential election. This proves that my petition had nothing to do with personal grudge as contended by the IEBC, Hon Uhuru Kenyatta and Hon William Ruto.

In the petition, I expressed our belief that the court would uphold the letter and spirit of ourconstitution. I pledged to abide by the court’S decision.

We prosecuted the case to the best of our ability. Our legal team, led by Senior Counsel George Oraro compiled formidable and logical evidence,showing that massive malpractices occurred during the elections.

We unearthed evidence of technology failure that required afull audit, inappropriate conduct on the part of IEBC staff, irregular andunethical arrangements such as the sharing of servers by IEBC with a competitor and unmarked registers.

We regret that the court disallowed evidence on the grounds that it was either filed late or the court did nothave time to inquire into these discrepancies. In the end, Kenyans lost their right to know what indeed happened.

Ladies and gentlemen, the court has now spoken. Article 140 of our constitution states that“the Supreme Court shall hear and determine the petition and its decision is final.”

Although we may not agree with some of its findings, and despite all the anomalies we have pointed out,our belief in constitutionalism remains supreme.Casting doubt on the judgment of the court could lead to higherpolitical and economic uncertainty,and make it more difficult for ourcountry to move forward.

We must soldier on in our resolve to reform our politics and institutions. Respect for the supremacy of the constitution in resolving disputes between fellow citizens is the surest foundation of our democratic society.

And the courts should always act within the evolving constitutionalculture.

I and my brother and running mateHon Kalonzo have no regrets for taking our case to court.Indeed, it is our view that this court process is yet another milestone in our long road towards democracy for which we have fought so long.

Truth, justice and the faithful implementation of the constitution is our best guarantee to peace and security.

Ladies and gentlemen,It is my hope that the incoming government will have fidelity to our constitution, and implement it to the letter for the betterment of our people. I wish president –elect Uhuru Kenyatta and deputyPresident elect William Ruto best of luck in this endeavour.

I also wish all the Senators, Members of Parliament, Women Representatives, Governors and others who were elected in the last election success in discharging the expectations of our people.

I want to thank Senior Counsel George Oraro and the members of his legal team for their hard work and devotion in the quest for justice. I would also like to pay special tribute to the Africog legal team led by Kethi Kilonzo for their immense contribution to the rule of law and democracy.

To the Kenyans who supported us and our petition, I want to assure you that I will continue to work for you and with you to build our county, Kenya, and to help you achieve your dreams.My actions have always been guided by my desire to bring about a better life for all Kenyans, particularly those who are less privileged.

The future of Kenya is bright. Let us not allow the elections to divide us. Let us re-unite as a Nation.

Finally, I call on all Kenyans– oursupporters and opponents alike – toremember the sacred words of our National Anthem: Justice be our shield and defender.

Thank You and God Bless Kenya.

Loading...
Blasphemy: Kanye West and Kim Kardashian To Name Son Christ – With a K < Previous
The Powermen Behind Raila Odinga Next >
Recommended stories you may like: