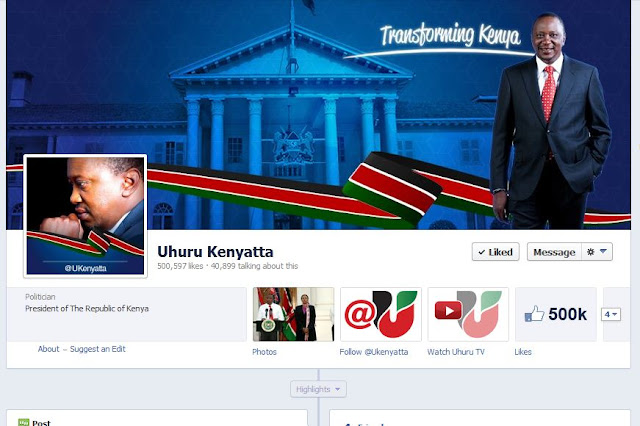 By now you should be aware that the President Uhuru Kenyatta has the most liked Facebook page in Kenya. It has been this way for several weeks now.

Read: Uhuru Overtakes Churchill To Have The Most Liked Facebook Page

In early March, Uhuru, then still a presidential candidate, overtook comedian Daniel Ndambuki, to have the most liked page in the country.
This was the message his campaign team released.

At that time, NTV Kenya stood at number 3, but Churchill has since lost the second spot to East Africa’s largest media house.
At the time of this writing, the top 3 look like so.

In a period of 56 days, president Uhuru has gained 77,000 new likes or an average of 40,000 every month. Assuming the trend continues, the president should be the first Kenyan to reach 1 million Facebook likes by May next year.
© nairobiwire.com

Loading...
"Don’t Rush Into Naming Your Cabinet," Mutahi Ngunyi Tells President Uhuru < Previous
Top 100 Most Influential Kenyans Next >
Recommended stories you may like: