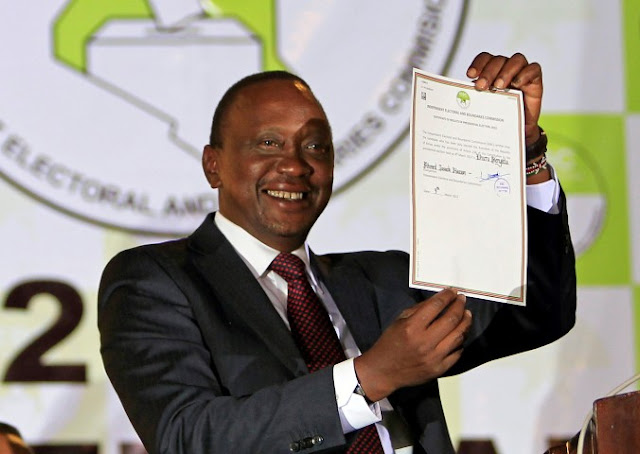 President Yoweri Kaguta Museveni has congratulated Kenya’s new President elect Uhuru Kenyatta upon his victory in the just concluded elections.
Museveni also congratulated the people of Kenya for conducting peaceful elections stating that, “Their conduct has redeemed the honour of Kenya and Africa.”
“I am writing to congratulate you on the historic victory you achieved by winning the tightly contested Presidential election in Kenya. Ugandans and the NRM congratulate you,” read the Presidents letter.

The President said that Uganda looked forward to consolidating the brotherly relations between the two countries within the wider East African and the Great Lakes region.
The United States embassy also issued a statement saying it would continue to be a strong friend of the Kenyan people and that all disputes should be handled through the courts.
The Independent Electoral and Boundaries Commission chairman Isaac Hassan announced Kenyatta President elect after fulfilling the constitutional requirements. Kenyatta garnered 6,173,433 votes, representing 50.07 per cent of the total votes cast and getting 25 per cent in 32 of Kenya’s 47 Counties.
But the Coalition for Reform and Democracy Presidential candidate Raila Odinga who came second  protested Uhuru’s win terming it illegitimate.
Addressing a press conference a few hours after the IEBC had declared Uhuru the winner, Raila said the whole exercise had been riddled with rigging.
He said, that the IEBC blundered like the previous Electoral Commission headed by the late Samuel Kivuitu. Raila cited the failure of the Electronic computerized system that gave way to manual vote tallying maintaining that registers had been tampered with.
He urged his supporters to remain calm and that the CORD team was heading to the Supreme Court.

By By Charles Etukuri for New Vision