What Uhuru Kenyatta Presidency Means For Africa – By TIME Magazine 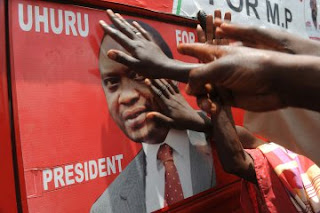 Below is an article by TIME magazine on the future of Africa, following Uhuru Kenyatta’s victory.

Uhuru Kenyatta, wanted by the International Criminal Court (ICC) for crimes against humanity, won election Saturday as Kenya‘s new President. The Independent Electoral and Boundaries Commission announced that Kenya’s richest man, the current Deputy Prime Minister and former Finance Minister, and the son of Kenya’s first President Jomo Kenyatta, won 50.07% of the vote — just marginally more than was needed to avoid a second round run-off. Kenyatta’s running mate Will Ruto, a second of the four Kenyans indicted by the ICC, is slated to become Deputy President. Turnout was a high 86%. With the margin of victory so thin, and the count plagued by days of delays and hundreds of thousands of spoiled ballots, Kenyatta’s main rival, Prime Minister Raila Odinga, has already said he will fight it in court.
If the result withstands Odinga’s challenge, a win for Kenyatta would represent the most stunning articulation to date of a renewed mood of self-assertion in Africa. Half a century ago, Africa echoed with the sound of anti-colonial liberation. Today, 10 years of dramatic and sustained economic growth and a growing political maturity coinciding with the economic meltdown in the West and political dysfunction in Washington and Europe, has granted Africa’s leaders the authority and means to once again challenge Western intervention on the continent, whether it comes in the form of foreign diplomatic pressure, foreign aid, foreign rights monitors or even foreign correspondents. In his victory speech, Kenyatta said: “Today, we celebrate the triumph of democracy; the triumph of peace; the triumph of nationhood. Despite the misgivings of many in the world, we demonstrated a level of political maturity that surpassed expectations. That is the real victory today. A victory for our nation. A victory that demonstrates to all that Kenya has finally come of age. That this, indeed, is Kenya’s moment.” He also pledged to work together with his political opponents with “friendship and cooperation.” “Kenya needs us to work together,” he said. “Kenya needs us to move on.” In a pointed warning to the international community, he added: “We expect the international community [to] respect the sovereignty and democratic will of the people of Kenya. The Africa star is shining brightly and the destiny of Africa is now in our hands.”

The ICC, based in The Hague, is a particular focus of African anger. The court accuses Kenyatta of being one of four Kenyans who orchestrated the bloody tribal violence which followed the last election in 2007-8. After paramilitary police loyal to the incumbent Mwai Kibaki — also from Kenyatta’s Kikuyu tribe — stormed the counting center, and shortly thereafter officials declared their candidate the winner, the country erupted in weeks of killing in which around 1,200 died and tens of thousands were displaced. The ICC intervened to try to bring those most responsible for the violence to account after concluding Kenya was unable to do so for itself
But the ICC’s focus on Africa — nearly all of its investigations concern Africans — has earned it accusations of bias. And the manner in which the 2007-8 tribal violence was beamed around the world by the Western media, deterring tourists and overshadowing the story of an increasingly less impoverished, and more healthy, sophisticated and self-reliant Kenya, also drew widespread resentment. At this election, with a new 2010 constitution, and a new electoral body with a new — though not glitch-free — electronic voting system, Kenyans’ determination to hold a peaceful election has been palpable. The popular mood has also been notably anti-Western. Foreign diplomats have been warned of blood-curdling revenge should they interfere in the poll. Foreign journalists have been publicly ridiculed and denounced as prejudiced if they predicted chaos and disaster. And a central message of most candidates’ campaigns was strident, patriotic self-determination. Kenyatta and Ruto — who deny the charges brought by the ICC — managed to convert a Kenyan public that initially largely supported the ICC’s attempts to call them to account into one that viewed the ICC as a representative of unwarranted Western interference in African affairs. In the last days of the campaign, Kenyatta’s Jubilee Alliance reflected and heightened the anti-West mood, saying it was “deeply concerned about the shadowy, suspicious and rather animated involvement of the British High Commissioner in Kenya’s election.” Such assertions of sovereignty are only likely to intensify under a Kenyatta presidency. Ruto’s trial is due to begin on May 28, Kenyatta’s on July 9. Both men have said they will attend — a point Kenyatta repeated Saturday when he said his government would “continue to cooperate with international institutions.” Kenyatta has, however, said that his official duties would prevent their pair from being at The Hague continually — a pointed diluting of the court’s importance, and one that will likely drag out trials already expected to last several years.
From the West’s perspective, a Kenyatta victory presents a conundrum. Assistant Secretary for African Affairs, Johnnie Carson, warned before the election that “choices have consequences,” widely seen as a recommendation that voters should back Odinga. London has already warned that it would keep official contact with a President Kenyatta to a minimum, as it does with Zimbabwean President Robert Mugabe. But the reality is that, in a world where Kenya finds itself as much sought after as suitor, Western powers no longer get to call the shots in Africa. In many ways, and particularly in its home-grown innovations in mobile technology such as mobile banking and solar power, Kenya personifies the new, emerging Africa of young and dynamic entrepreneurs. Its position as East Africa’s business hub has only been enhanced by its recent discovery of large reserves of oil and gas. Kenya is also a lynchpin of the U.S. and European security structure in Africa, ranged as it is against Islamist groups and pirates, particularly in neighboring Somalia. Westerners rely on Kenya in other ways too: the Kenyan capital, Nairobi, is the base of choice for much of the international community in East Africa, from large embassies to aid group headquarters to donor conferences to security contractors. And should the West give Kenya the cold shoulder, it may find it is not missed as it once might have been: Chinese, Indian, Middle Eastern and Latin American diplomats and businessmen are also part of the fabric in today’s Kenya.
In Washington last month, Carson’s predecessor at the State Department Jendayi Frazer warned Western leaders to be “pragmatic” in their approach to Kenya, adding she was “troubled” by Carson’s “very reckless and irresponsible” statement, which she called “essentially meddling in Kenya’s election.” The ICC case against Kenyatta “is a weak one and is based on hearsay,” she said in a public discussion at the Brookings Institution, and — in words that might have come from Kenyatta himself — she added the ICC itself was “a very manipulated institution, particularly by the West.”