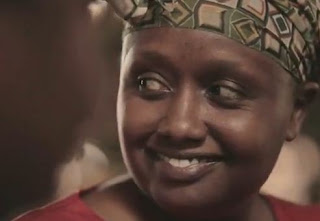 A few months back, Jimmy Gathu was singing everywhere ‘Wacha Mpango Wa Kando’, a loose translation of ‘Be Faithful’. Despite all the publicity, cheating was still rampant.
Someone had to go back to the drawing board.

This new ad features two women, one of whom innocently enquires about her friend’s husband. As is the case with many families in Kenya, the husband is a drunkard who never satisfies his wife in bedroom affairs.

As fate would have it, there is a ‘mpango wa kando‘, who happens to be very good and loving. The concerned friend then goes ahead to advise her friend to always use a condom when with Mbugua, the mpango was kando.
The ad then concludes with a voice saying, “Chochote umeamua, weka condom mpangoni.”
It’s sponsored by USAID, UKaid and the Ministry of Public Health and Sanitation.

This latest strategy to fight AIDS is completely different from the one spearheaded by Jimmy Gathu. In this one, they acknowledge that the choice to cheat on mate is personal, and probably unaffected by a voice on TV. With that in mind, the most logical thing to do is to advise the cheating mates to take preventive actions.

Religious leaders are however not very okay with this approach. On Monday, they demanded that the CCK orders the immediate removal of the advertisement. They argued that it is promoting immorality, and that there are better ways of passing useful information to the public.

So what do other Kenyans think? Below are comments from social media

Numbers don’t lie, more married folks are dying of HIV, they are the same folks fighting the CondomAd – Mokaya

The issue with that Condom AD is not condom itself. It’s the message which is promotion of ‘Mpango wa Kando’. – Karani Mutonga

The Condom Ad drives home the reality that mutual Adultery is as old as Mankind. We just pretend it does not exist!  – Isaac Tuei

Condom Ad is real. Let’s not run away from the truth. – Joab Mokaya

I am a mother, my son needs to learn to value women and not use them. As parents, God gave us a unique task. Raise them well. – Joey Wangechi

I didn’t see anything wrong with the Condom Ad  what do we expect and the TumeChill campaign failed heavily. – Jose

Jimmy gathu’s ad ‘wacha mpango wa kando’ was the right ad, not the one which allows immorality. – Lemek

Loading...
The Faces of The New Look K24 – Pictures < Previous
Caster Semenya is a Lesbian.. and engaged to fellow athlete Violet Raseboya Next >
Recommended stories you may like: