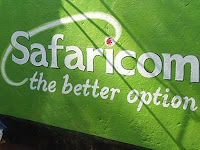 There have been reports that Safaricom is the reason why transmission of election results from constituency level has been awful. It has been claimed that their servers or the VPN network they’re providing for IEBC have crashed.
The mobile operator has now come out to clarify its role in the elections, through a press statement released on Wednesday afternoon.

CLARIFICATION ON SAFARICOM’S ROLE IN THE MARCH 4TH 2013 GENERAL ELECTIONS
Following numerous queries from the media and in response to public concern, leading integrated communications service provider Safaricom Limited wishes to clarify its specific role with respect to the conduct of the historic March 4th, 2013 General Elections.

As a responsible corporate citizen, Safaricom appreciates and takes seriously its assigned responsibilities and will continue to play its part to support the IEBC in its duties.