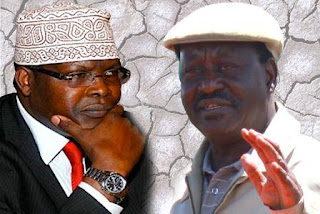 In this article written by Miguna Miguna while still an adviser to the prime minister in July 2011, and appearing on The Star newspaper, Miguna attacked the IEBC (then IIEC) chairman Isaack Hassan for ineffectiveness among other misdoings.
Miguna wrote that Hassan’s “record is patchy” and he did not impress in the handling of the 2010 referendum. He added that Hassan “isn’t a good courtroom lawyer, nor a good drafter or negotiator.

Although English has always been the de facto principal medium of communication in parliament, over the years, many MPs have managed make do with a fleeting acquaintance with the language. And since the onset of live television coverage of parliamentary proceedings, we have watched with delight the linguistic challenge most MPs face in both English and Swahili.
Yet of all prominent public figures in Kenya today, the most distinguished linguistic offender isn’t Bifwoli Sylvester Wakoli, Kambi Kasungu, Ephraim Maina, Cyprian Omolo, Wilfred Moriasi Ombui or Clement Wabara . The gold medal for linguistic and logical incoherence goes to the IIEC chairperson Hassan Ahmed Isaack. This isn’t a trophy you win through occasional lapses. One gets the ‘privilege’ of holding the title through persistent failure.

Many people watching Isaack speak may feel sympathy for him on the mistaken belief that he stammers. I’ve watched this man keenly over the past three years and can confirm that what sounds like natural stutter is actually due to logical incoherence, confusion and uncertainty. Those who can’t think clearly can’t also speak coherently.
The IIEC has been praised for conducting a number of by-elections around the country fairly well. It also received well-deserved kudos for holding a peaceful constitutional referendum last August. Yet credit goes to the entire institution, not just to one man. Isaac has tended to hog the limelight and claim all the credit.

Conveniently forgotten are the IIEC employees, those faceless and anonymous, hardworking and dedicated patriots. These are the people who prepare the ground and physically conduct elections. Without them, there would be no voting booths, no inks, no ballot papers and nothing to count. It’s the IIEC workers – the clerks and returning officers – who are largely responsible for the integrity of the electoral process. And of course, these people work as a team with the commissioners, the CEO and the senior executives at the IIEC.
People tend to serenade Isaac with all the successes of the interim electoral body without asking whether those praises are well deserved. For starters, is Isaac a good manager? Looking at the ethnic intrigues and rumblings about questionable procurement at the IIEC, one has to wonder about Isaac’s integrity and management skills. But more fundamentally, what is Isaac’s background? Does he have a solid legal background?

As a lawyer, Isaack’s record is patchy. He isn’t a good courtroom lawyer, nor is he a good drafter or negotiator. In fact, Isaack isn’t quick on his feet. He floundered badly when the ‘red brigade’ invaded the Bomas of Kenya where the IIEC was releasing results for the referendum. He couldn’t stand his ground. He couldn’t explain the minor computer glitches. He couldn’t rebut the unfounded rumours that the ‘green campaign’ was doctoring results. If he couldn’t handle such a simple electoral exercise, he certainly can’t manage presidential, gubernatorial, parliamentary and civic elections with a ten metre-long ballot paper.

His record at the CKRC isn’t endearing either. Reports indicate that he was among the commissioners who tried to scuttle the process on behalf of Moi. When Isaack was appointed to the Kiruki Commission to be part of an ‘investigation’ of the criminal escapades of Artur Brothers, many Kenyans suspected that he was part of a well designed cover-up. Apart from the millions the Kiruki Commission skimmed off the public till, it didn’t advance any known public interest.
Two weeks ago, Isaac addressed a press conference and announced that he had ‘recalled’ a letter the IIEC had sent to the Minister for Local Government ratifying ODM’s request to de-gazette 34 nominated councillors for non-compliance with the party’s policies. Not only was Isaac’s ‘decision’ unilateral; it wasn’t an IIEC decision. It was also difficult to understand how he could ‘recall’ a letter orally at a press conference.

But the most intriguing part of Isaac’s press conference was the ‘reason’ he gave for the reversal. First, he argued that if ODM wants to de-gazette councillors for disloyalty, it should start with the ‘big fish’ within the party. True to form, he didn’t offer any logical or legal basis for saying so. He stated that unless ODM moved against William Ruto and company first, he will not allow it to de-gazette the councillors. Again, there wasn’t any foundation for that, either.
Isaack is partisan. He has always been. That’s typical of status-quo elements. They rely on patronage to survive. Nearly one year ago, ODM petitioned the Registrar of Political Parties – which is operating under him – to have a number of ODM rebel MPs removed from its register as having resigned from the party. To date, the registrar hasn’t acted on that petition. The law grants ODM, like any other party, power to take action against disloyal members. The law doesn’t give Isaack power to supervise, vet or grant permission to parties when making that decision.

Isaack’s declaration that ODM must go against the ‘big fish’ first exposes his bias and rusty legal reasoning. Coming soon after Isaack’s childhood friend Aden Duale’s press conference ‘condemning’ ODM for the action, many knew that Isaac had been recruited into the factional war within ODM.