Julie Gichuru Takes a Break From Sunday Live, But Denies She’s Been Poached By K24 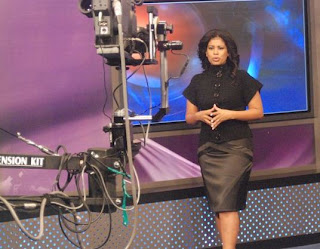 Last night, Citizen TV announced that Julie Gichuru would co-host Sunday Live with Janet Mbugua. At first, no one thought much of it because hey, they hosted the election special together.

When the show started Julie revealed that it was a special one, but again, Monday is the presidential petition pre-trial hearing and they’ve had many special Sunday Live shows anyway.
But then came the bombshell, Julie was leaving Sunday Live. Her presence yesterday was merely to introduce and orientate Janet Mbugua, the new Sunday Live host.
Throughout the show, the two were careful not to reveal where she was headed. Meanwhile on social media, Kenyans could not control their anxiety. Speculation was that she had been poached by K24, just like several of her colleagues.

The influential Robert Alai wrote, “Julie taking sometime off before joining K24. You know she is the daughter-in-law of Samuel Gichuru so deceit is her middle name”

And then others followed.

Is Julie Gichuru also moving to K24 I see she is handing over to Janet Mbugua? – Neville Ong’ute

Julie Gichuru giving a farewell speech on #SundayLive….Guess next destination is K24 – Moose

I think word got to her in studio, because half way through her show, Julie dispelled the rumours saying she was still at the station, only that she was taking a break from reading news for a few weeks.
Together with Janet Mbugua, Julie briefly shifted her attention to Hussein Mohammed pleading with him to stay at Citizen, just coming short of making him promise on air that he’ll shun any poaching attempts.

Peter Opondo added his voice, by tweeting that julie was just taking a break.

Just to clarify; @juliegichuru is not leaving @CitizenTVNews, she’s simply taking a break…@JanetMbugua will driver the show in her absence

At the end of the show, she revealed that she’s just taking a break to concentrate on some things she’s passionate about. She promised to be back soon, with probably something new.
Perhaps she’s decided to concentrate on mimi.co.ke full time
© nairobiwire.com