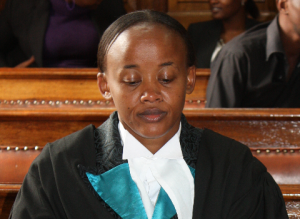 She has continued to mesmerize Kenyans with her grasp of everything legal. The fact that she’s a daughter to Mutula Kilonzo has further fueled this.

Almost everyone is in agreement that Kethi Kilonzo has been the most outstanding lawyer in the ongoing election petition hearing at the Supreme Court of Kenya. However, there are some dissenting voices trying to get our attention.

Here are some observations by some notable Kenyans.

Maina Kageni – That look on Mutula Kilonzo’s face …priceless! …no school fees has been wasted.

Emmanuel Talam – Change of mind; my daughter will be a lawyer when she grows up like Kethi Kilonzo.”

Sam Shollei – This guy, this guy Mutula Kilonzo to encourage his daughter support her,watch her shine is greatness for any father-to you Mutula to Kethi

Kethi Kilonzo making millions of Kenyans proud, especially women.” I am so proud of what she’s undertaking. Super stuff.

Kethi Kilonzo is a living proof that not every woman uses thighs and breasts as her stronghold..

This Kethi kilonzo lady got an award winning forehead!

This one from Ndindi Nyoro was particularly hard hitting.

Me thinks this KETHI KILONZO chic is being overated on Social Media.. Actually, she doesn’t seem to have grip of Law.. Again, those citing her age??
Do you even know how old she is?? Or you guys think she’s 22??
Lastly, if your Father was Moi’s Lawyer during the worst times in this country and when corruption was the norm, don’t you think she has actually done very poorly for herself by being a mere lawyer inside her Fathe’rs Firm!!?? Call a spade a Spade..
The circumstances she was brought up in makes her what others see as an achievement a mere Kawaida thing… To me, she doesn’t pass the test!!
Ako down in Kenyan words!!
She could have done better!!

Loading...
Did Kim Kardashian Call Nigeria Women Apes? < Previous
Shocking: Why Kampala International University Has Been Blacklisted (Photo) Next >
Recommended stories you may like: