Larry Madowo is making a name for himself, and was particularly successful during the reporting of the just concluded elections. On elections day, NTV chattered a light aircraft for the talkative journalist, and literally made him omnipresent. One minute he was in Wajir, the other in Tana River. He stole the show that day.

When the results started trickling him, he was again all over the place at NTV studios. He particularly enjoyed playing with the touch screen in the studio. Together with Wallace Kantai, the two made a perfect couple; plus of course Smriti Vidyarthi.
Some people have christened him Madomo, though a good number has stuck with Madowo, but while there is disagreement on what to call him, almost everyone is in agreement that the good journalist suffers from an inflated feeling of self importance.
Tracing back his steps, it will be remembered he started at KTN, before being poached by NTV, then CNBC Africa and then NTV got him again.
If everyone wants him, then its understandable why he occasionally gets over himself. Anyone would. Plus, he even has a verified Twitter account.

Yesterday however, the government spokesman Muthui Kariuki, or whoever tweets on the office’ official handle, did not have some very nice words for the journalist. Okay, it may not have been in bad taste, but it did sound funny.
Madowo was making an ‘innocent’ inquiry of what he would do in case his supporters spontaneously gather and demand to be addressed, now that the Inspector General has banned public rallies.

This was the spokesman’s reply.

@LarryMadowo we are sure those 2-3 people won’t be in contravention of the law banning illegal gatherings.

Maybe Muthui Kariuki did not intend to be harsh, but I think Larry should now go back to the drawing board. Even the Government Spokesman thinks he’s not as popular as he thinks. Maybe just famous. 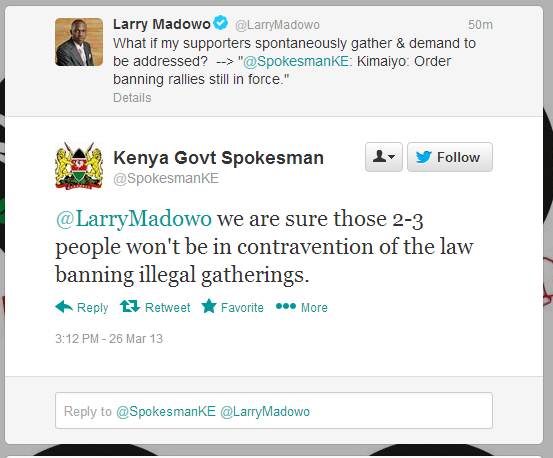 ‘Every Woman Is An Entrepreneur’: Melvin’s Tea Founder
Loading...
The Latest