Full Details of CORD’s Petition. Do They Have a Case? 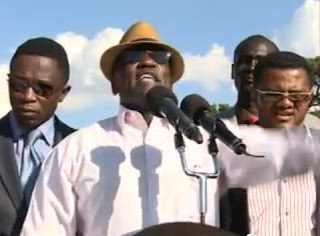 SUMMARY OF THE CORD PETITION
What the Petitioner (Hon. Raila Odinga)is asking the court to do:
1. Set aside the results of the Presidential election as announced by IEBC on 9March 2013, and the declaration of Uhuru Kenyatta as President-elect and William Ruto as Deputy President-elect respectively, and declare as null and void the whole electoral process leading to that declaration.

What the petition says:
• There was no free or fair presidential elections. Consequently no government could lawfully be formed by or from the purported declaration on 9th March 2013, of Uhuru Kenyatta and William Ruto as President-elect and Deputy President-elect respectively, by the IEBC and its chairman to the dishonor of the Kenyan people.

• The voter register was severally altered as to make it difficult to tell which one was used finally. For the purposes of the 4th March elections the registration of voters was carried out between 19November 2012 to 18th December, 2012, at the end of which the IEBC announced that 14,337,399 persons had registered as voters.

• In breach of the mandatory legal requirement, the IEBC has falsely, unlawfully and illegally in flagrant disregard of the law and its declaration of the result of the presidential election held on the 4th March, 2013 reflected the total number of registered voters as 14,352,533 well above the total number of registered voters as the date of closing of registration on 18th December, 2013. Indeed, during February 2013, the IEBC announced that they had discovered approximately 20,000 persons who had double registered in the December registration, and accordingly reduced the register tally to 14,267,572 voters as displayed on its website. The illegally inflated March 2013 register exceeded this corrected figure by some 85,000 voters.

• The Petitioner avers that increasing the number of registered voters was intended to permit the IEBC to manipulate the presidential election held on 4th March, 2013 and their purported results and declaration, on 9th March, 2013 was null and void. That by abandoning the process of electronic identification at the polling stations and releasing results based not on the safeguarded, agreed, determined and credible electoral process it had promised and committed to, and by which legitimate expectations accrued, but a process that failed so significantly, substantially and endemically, IEBC effectively failed to reflect the will of the Kenyan people at the election.

• Arising from the acts and omissions of the IEBC, Hon. Raila Odinga and indeed the people of Kenya, were deprived of a free and fair election devoid of manipulation, an expectation which was denied, thereby irreparably undermining the entire process and result as declared on 9th March, 2013.
• Because of the IEBC and its chairman’s acts and omissions, the electoral process and the outcome thereof is so flawed in so fundamental and grave a sense, taken together or viewed separately, that it is difficult to tell whether the results were the true, lawful and proper expression of the Kenyan people’s will.

• The EVID and BVR system and the electronic results transmission systems adopted by the First Respondent were so poorly selected, designed and implemented that they were destined to fail from inception, to the knowledge of the IEBC; the failure and collapse, on a catastrophic scale on the polling day, so fundamentally changed the system of polling and the number of votes cast, owing to inordinate and inexplicable delays at the polling stations thereby reverting Kenya to the discredited manual system, with all the attendant risks and opportunities for abuse and manipulation which in fact took place.

• The IEBC and its chairman’s purported official tally of registered voters inexplicably and mysteriously grew overnight by a large proportion on the eve of the election, notwithstanding that registration had closed some thirty days and was by law not permitted to be opened or changed.

• The results as declared and recorded by IEBC contained wide spread instances of manipulation of the returns through manipulation of Form 36 and in some instances the votes cast exceeding the numbers of registered voters, in flagrant breach of the fundamental Constitutional principles (see examples below).

• Although a common register was to be – and indeed was – compiled for all the six levels of elections in the general elections of 4th March, 2013, it turned out from the results declared by IEBC that the total number of registered voters and votes cast in respect of the presidential elections in some instances exceeded that of the registered voters and those cast for Parliamentary elections after taking due account of any spoilt or rejected or disputed votes to the detriment of Raila Odinga. The numerous instances of huge discrepancies in the total numbers of votes declared by the First and Second Respondent in the presidential election held on 4th March, 2013 is inexplicable upon any reasonable hypothesis other than the existence of actual ballot stuffing, multiple voting or gerrymandering or inflating of the numbers of votes in the tallying thereof by the IEBC or their officers or their condoning of or connivance in the same to the advantage of Uhuru and Ruto thereby rendering their alleged win invalid, illegal, null and void. Anecdotal examples of widespread anomalies:
Glaring anomalies were observed in the process from voter registration, to
transmission of results, to tallying.
(a) the result were declared on the basis of unsigned Form 36,
(b) multiplicity of Form 36, and variants of entries in some constituencies
(c) alterations on files and
(d) brazen disregard by the IEBC of the entries on the files of constituencies which were eventually reflected in the final tally of Presidential election results and which were announced without signed
verification Form 34s.
Votes cast exceeded the number of registered voters, including Tiaty, Laisamis, Igembe Central, Buri, Chuka, Iburi, Igamba Ngombe, Lari, Kapenguria, Saboti, Turbo, Marakwet West, Kajiado West, Bomet East, Mt Elgon, Langata and Aldai.
Results in Form 36 disclosed by the First Respondent were materially different from the results that were posted in the final tally of the presidential results published by the First Respondent. This included in Webuye East, Webuye West and Igembe Constituencies.
Registered voter numbers in polling stations were inflated in Form 34 contrary to what was contained in Form 36. These included Kaproi Nursery School, Metipso Primary School, Maina Primary School, asaibul Primary School, Sewerwa Nursery School, Liter Secondary School, Chesongoch Catholic Church, Mungiwa Primary School, Chawich Primary School and Lemeuywo Primary School. In most of those circumstances, more votes were cast than the total number of registered voters. More than two Form 36 reflecting different returns. These included Kikuyu Constituency, Juja Constituency, Chuka Constituency, Thika Constituency. Alterations in Form 36 without acknowledgment including Kiambaa and Limuru Constituencies.
More valid votes cast in some constituencies reflected in Forms 36 than in Form 34 including in Chesumei, Emngwen and Ainamoi. Different entries in two Forms 36 submitted in respect of the same constituency for example in Mathira Constituency. Published results materially different from the results reflected in the County tallying, for example in Nakuru, not to mention the material variation between the verbal declaration made by the various Commissioners of IEBC at the national tallying centre allegedly after verification of results and the fiinal figures which are set out by the IEBC including those of South Imenti, Igembe South, Lagdera, North Imenti, Central Imenti, Boment East and Sigor.