The tweet which said ‘Nigeria is such a disgusting country. I couldn’t wait to leave. lol Scott said their women look like  apes and I agree’, had a lot of people confused because the pregnant star had only just visited Nigeria in February if only for less than 24 hours. 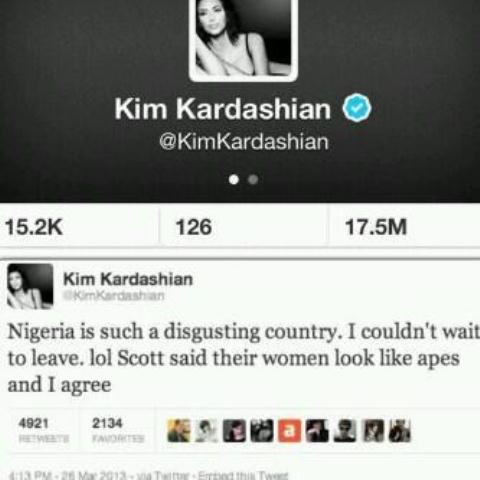 Some claim she sent the tweet as a direct message to her sister Khloe, but ended up tweeting it publicly instead. Well I knew as soon as I saw it, it was a fake tweet. Photoshopped to look real by a twitter prankster @chuckicheese, who later admitted to creating the photoshopped tweet.

Sadly a lot of Nigerians didn’t know this, and we ride hard for our country, so they did the only thing they knew how to, flood her twitter timeline with all manner of abuse & curses. By the time Nigerians were done calling on Sango, Orunmila & Guru Maharaji to inflict harm on her unborn child, she quickly took to twitter to debunk the accusations.
Here’s what she tweeted;

I see there’s a photo shopped tweet floating around, supposedly something I said about Nigeria. That was NOT me, or my feelings.
— Kim Kardashian (@KimKardashian) March 27, 2013

How Much Jalang’o Was Paid To Emcee Obama Event
Loading...
The Latest