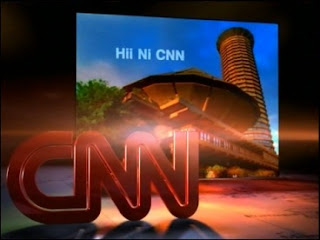 Last week, CNN was under attack from Kenyans online for airing a report which showed ‘militias’ armed with handmade guns and machetes allegedly getting ready for violence. Kenyans believe that the report was stage managed, especially because the ‘actors’ wore the white face painting synonymous with Kikuyu comedy actors.
The government asked Nima Elbagir (the reporter behind the story), to reveal her sources. The government spokesman Muthui Kariuki even had a meeting with Nima but she refused to reveal who or where those ‘militias’ were, citing witness confidentiality.

Various personalities attacked the station, among them Bitange Ndemo, Julie Gichuru, and the government spokesman himself.
CNN would soon release a statement denying that the story was stage managed. This is the statement they released.

“CNN absolutely denies any allegation that our correspondent Nima Elbagir’s report on militia in Kenya’s Rift Valley was in any way ‘stage managed’.

“Given that the potential threat of violence around the election has been well documented by Human Rights Watch and the Kenyan Police it was entirely appropriate that the actions of local Kikuyu militia were scrutinised. We stand by our decision to report this story and have taken great care to place it in context. We will not reveal our sources on this or any story and strongly resist any attempt to force us to do so.

“We will continue with balanced and accurate reporting of these important elections. This coverage has directly referenced peace rallies in Kenya and includes interviews with Kenyan political figures and satirists, a look at the hopes of Kenyan children for the future, a view of political street art, and several other pieces – on TV and online – that illustrate all sides of the election picture.”

Loading...
Diaspora Video Response To Susan of Tujuane < Previous
Provisional Results For Members of Parliament Next >
Recommended stories you may like: