Caster Semenya is a Lesbian.. and engaged to fellow athlete Violet Raseboya 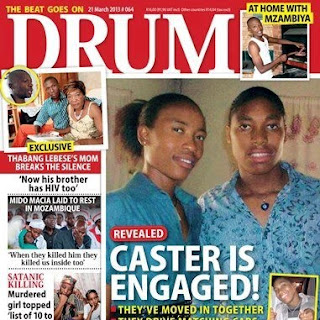 CASTER Semenya is in love! Just weeks after rumours surfaced on social networks that middle-distance world champion and Olympiad Caster was pregnant she brushed off our enquiries with an adamant, “My private life has nothing to do with you.”
DRUM went searching for answers.

While the rumours that she’s pregnant are unlikely, DRUM can reveal that the 22-year-old athlete is “madly in love” with 27-year-old fellow athlete Violet Ledile Raseboya. Rumours of their relationship go as far back as 2008 when fellow athletes noticed the two had grown close.
DRUM can reveal that the lovebirds have been living together for two years and became “very serious” recently.

No fewer than four sources known to the couple say the lovebirds also “make life decisions together” and are set to wed as soon as time permits. “Caster is not dating a Bafana Bafana player, nor is she pregnant – that would be ridiculous. She’s with Violet and they’re lesbians,”  says our source.
Limpopo-born Caster hit the limelight after she was scandalously subjected to gender testing after winning the 800 metres at the 2009 World Championships. Back then she used to wear a gold ring on her left pinkie finger. These days it’s her left ring finger that sports a gold wedding band.
Drum