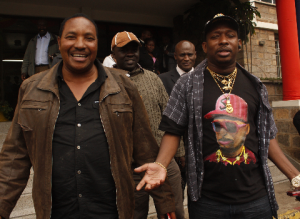 Nairobi gubernatorial candidate Ferdinand Waititu and his party mate and Senate candidate Mike Sonko were on Friday night booed off stage at the Esagasaga Night held at Carnivore.
The two had joined the Kisii community at the popular restaurant to solicit their support, but was in for a rude shock.

Waititu arrived at around midnight alongside his running mate Robin Achoki, and was met by shouts of ODM, Hatutaki Jubilee and We are Corded.
Immediately he stepped onto the stage, the revelers, some of who were carrying Prime minister Raila Odinga and Evans Kidero’s posters started booing. The organizers attempt to calm the crowd down failed. Veteran radio personality Fred Ombachi Machoka plea was also in vain. Eventually, Waititu’s security had to whisk him away, as the situation threatened to get out of hand.

At around 2 am, Mike Sonko walked in and just like Waititu before him, was booed with pro-Raila and pro-Wanjiru slogans. His security whisked him away, after two rival groups started exchanging blows.
© nairobiwire.com

Loading...
Are Kalekye Mumo And DJ Sadic Dating?? < Previous
A Very Funny Pregnancy Joke Next >
Recommended stories you may like:

Trial Magistrate Loses Patience After Waititu No-Show Due To Bedrest