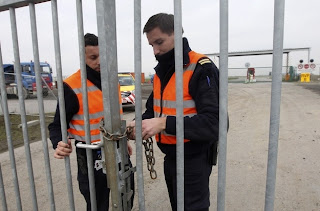 (CNN) — Night had fallen. Some 20 airplane passengers had taken their seats for the short hop from Brussels, Belgium, to Zurich, Switzerland.

Unknown to them, a precious cargo was being loaded into the airplane hold along with their suitcases: $50 million in rough and polished diamonds.
But the diamonds would never reach their final destination.
Shortly before 8 p.m. Monday, eight masked men in two vehicles burst through the perimeter fence of Brussels Airport and sped toward the aircraft on the tarmac.
The men, who authorities said wore clothing resembling police uniforms, were heavily armed.
While no shots were fired and no one was injured, the pilot, co-pilot and a transport security guard were all threatened at gunpoint, said Ine Van Wymersch, of the Public Prosecutor’s Office in Brussels.
Within three minutes, the thieves had snatched the diamonds from the hold, said airport spokesman Jan Van der Cruysse.
Moments later they left the scene, racing out through the same breach in the airport periphery through which they had entered.
The robbers, four in each car, had broken a hole in the fence where it ran between two construction sites, Van Wymersch told a news conference.
“This was a very precise, almost military-organized and well-executed robbery,” Van der Cruysse said.
He said it was a “big surprise” that such a slick heist been possible — but pointed the finger at organized crime.
“We are an airport that is, as all international airports are, subject to very strict aviation security and safety regulations,” he said.
The aircraft targeted was a regular passenger flight operated by Helvetic Airways on behalf of Swiss, Switzerland’s national airline.
It’s not yet clear how the thieves knew that the diamonds would be on board.
But this was not a chance hold-up, said Van Wymersch, describing the men involved as “professionals.”
Antwerp, the city known as the world’s diamond-cutting capital, lies only about 25 miles away from Brussels.
The Antwerp World Diamond Centre has on average $200 million in stones coming in and out daily, and it takes security very seriously, a spokesman told CNN.
He was unable to confirm reports that gold and platinum were stolen along with the diamonds.
It’s not the first time that Antwerp’s centuries-old diamond trade has been targeted.
The city was the scene of a spectacular robbery in 2003 when thieves made off with the contents of more than 100 safes at the diamond center. Those gems were never recovered.
Some 34,000 jobs in the city are connected to the diamond trade, according to the Antwerp World Diamond Centre, from mining company representatives to dealers to the craftsmen who polish the stones.
Loading...
Why Uhuru Kenyatta Withdrew From The 2nd Presidential Debate < Previous
This Love Story Will Make You Shed Tears Next >
Recommended stories you may like: