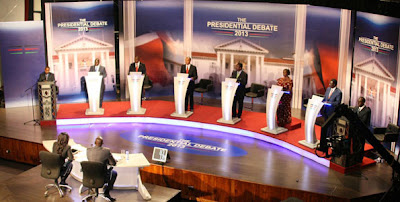 Deputy Presidential candidates are expected to face-off in a live debate scheduled for tonight.
This event comes two days after the presidential debate organised by the mainstream media.  The vice presidents’ debate has been organised by mainstream Christian Church leaders, Christian media in conjunction with the national broadcaster -KBC and Daystar University.
The event aims to assess the extent to which running mates of the presidential candidates share the vision of their principals.
The organisers have urged the  public to send questions touching on morals, ethics and other concerns through their churches, ministers, Christian media and through social media.

The debate will be aired between 7pm and 8pm live on on KBC TV and all KBC radios, and on other Christian media including Sifa FM, Transworld Radio, Radio Waumini, Hope FM, Hope TV, Fish FM, Radio Maria, Sayare Radio, Sayare TV, Radio Akicha, Radio Amani, Biblia Husema Radio, and Shine FM.
A presidential debate similar to that aired on Monday will also take place on February 19.The public can send their questions and concerns through a Facebook page Presidential Debate 2013: The Christian Edge, a twitter account @pdc2013 or to the email address [email protected]

Loading...
Why Esther Passaris Is Not Answering Your Calls < Previous
Here’s An Old Photo of Bishop Margaret Wanjiru.. Very old photo Next >
Recommended stories you may like:

Have Some Manners Or Return To Opposition, Ruto Tells Raila