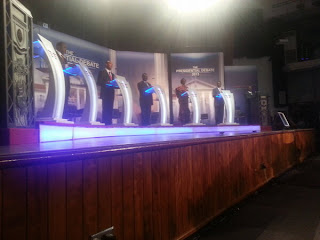 Last night, Kenya held its first ever presidential debate which brought together all the 8 candidates. Previous arrangements by the organizers to exclude two of the candidates namely: Paul Muite and Mohammed Dida were thwarted by the High Court, which ordered that either they be included or the whole exercise be cancelled.
As is the norm, some politicians were still arriving by 7:00 PM, a whole 30 minutes after they were supposed to arrive. Ole Kiyiapi, Martha Karua and Peter Kenneth were among the first to attend. Raila Odinga was received by Jamilla Mohammed while Uhuru Kenyatta was received by Janet Mbugua. After their arrival, they all headed to different VIP rooms for brief refreshments before converging in a room where they picked numbers to determine which podium they would stand at.

They then proceed to the auditorium, starting with Abduba Diba, who had no clue on where to stand owing to his not attending the rehearsals. The rest followed in that order. Some forgot to shake the others’ hands and unfortunately Mudavadi who had gone through the rehearsals was among them. Musician Atemi then sang the national anthem with an okay voice, but Linus Kaikai destroyed it by singing onto his microphone.
The candidates then introduced themselves and it was game on.

The actual debate started as a two horse race, with Uhuru and Raila taking on each other, particularly on the ICC issue. Despite Raila hard questions, the DPM had ready answers… and then, the hunter became the hunted. Other candidates, particularly Peter Kenneth and Martha Karua attacked Raila on what they termed insincerity on the matter. Karua claimed that Raila never tried to push his people to vote for a local tribunal, but Raila also had good answers.

The debate then shifted from its initial two horse race, to a more balanced platform. This is when Abduba Diba made his mark. The mwalimu gave a series of funny quotes, with the most remembered being, ‘Eat when you’re hungry’, where he attacked Kenyans eating habits.

As all this was happening, water minister Charity Ngilu was deeply asleep, and the cameramen made a point of showing us.
So, who do you think won the presidential debate?