Miguna Beats House girl For Trying To Poison Him… Allegedly 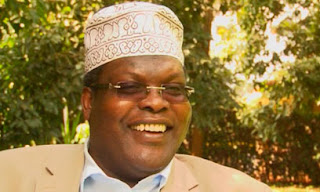 Miguna is in the news again. This time, it’s a small household matter, that the media got wind of. Yesterday, his house help recorded a statement at Runda Police Station, claiming that Miguna had assaulted her and kicked her out of his house, without letting her take her belongings. The house help made those allegations on Monday morning.

Soon after, a team of CID were sent over to Miguna’s mansion, where they quizzed him for almost an hour before leaving. However, the police were reluctant to head to Miguna’s home, until journalists started pursuing the story. Reports started flying on social media that Miguna had been arrested and was currently locked up at a police station.
Gigiri OCPD Patrick Mwakio would later confirm that Miguna had indeed made a trip to the police station, but for a totally different matter.

After concluding with the police, Miguna invited journalists into his massive compound and he’s not shy to say how he has built it with his hard earned money.
He denied physically assaulting his maid, and instead accused her of almost poisoning him. According to him, the house girl had confessed to having received Sh 1 million, to bug Miguna’s phones and then kill him.

He however did not deny kicking the girl out of his house. “At about 7:10 am, I terminated the house help’s employment in writing and paid her the monthly salary of Sh10,000 even though her pay is not due up to the end of February this year. She signed the termination letter voluntarily. There was no physical contact between me or my nephew and her.” he said.

However, when questions became too hard, Miguna turned the heat on the journalists, accusing them of having been sent by Raila.
“Leave now, I do not want to see people packing their belongings in this compound. Get out now because I know you have been sent by Raila,” said a bitter Miguna.

Loading...
Miguna: Raila Paid My House help To Poison Me < Previous
Open Letter To Churchill For Giving Us A Boring Show on Sunday Next >
Recommended stories you may like: