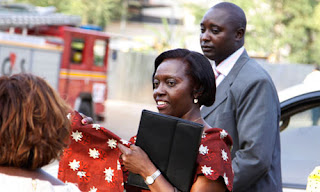 There was drama yesterday at the COTU organized Presidential Debate held at the Laico Regency Hotel, after Narc Kenya presidential candidate Martha Karua protested the presence of Kalonzo Musyoka.

Prime minister Raila Odinga sent Kalonzo to represent him at the debate, and the organizers allowed him to take a position at the podium alongside the presidential candidates. Karua appeared irritated immediately Kalonzo walked in, and was seen asking the VP not to take a chair among the presidential candidates and instead join the audience. Not taking her seriously, Kalonzo proceed to take the chair reserved for CORD.

The moderators however defended their decision to allow Kalonzo represent Raila saying they took cognizance of the powers for a president to delegate to his running mate.

Karua was still not convinced because she would soon walk out immediately Kalonzo was invited to address the audience. This was despite her seating through the speeches of Paul Muite, James ole Kiyiapi and Mohamed Abduba Dida. She walked straight to the hotel lobby and refused to talk to the media.

The debate that was supposed to have all presidential candidates ended up with only four. Uhuru Kenyatta, Raila Odinga and Peter Kenneth failed to show up. COTU secretary general Francis Atwoli explained that Uhuru had personally confirmed attendance on Tuesday evening. He however added that he may have been held up by the busy campaign schedule.
© nairobiwire.com

Loading...
Veteran Nollywood Actor Justus Esiri Is Dead < Previous
Nairobi Wire Caught Pants Down Next >
Recommended stories you may like: