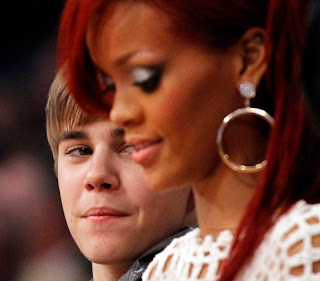 Rumors are swirling that Justin Bieber and Selena Gomez may be reconciling once again, but the question of why they broke up in the first place has never been answered — until now.
Life & Style would like you to believe that Gomez, 20, called off her two year relationship with the 18-year-old pop star after she found out Bieber had cheated on her with Rihanna during the early stages of their relationship.
We’ll let you pause for a moment to catch your breath from laughing so hard, but a friend of Gomez’s told the magazine that news of the alleged affair has “devastated her.”

“It really cut like a knife because it happened in February of 2011, when Selena and Justin had been dating for months and were falling in love. It’s caused Selena to question their entire relationship,” the source told Life & Style.
According to the friend, Bieber and Rihanna hooked up after an evening of flirting at the NBA All-Stars game in February 2011. While it’s true that Bieber and Rihanna were spotted sitting next to each other, allegations that the two hooked up seem more than dubious. Given the timeline, Bieber would have been a week shy of his 17th birthday, while Rihanna would have been 22. Plus, (for whatever reason) Bieber is good friends with Chris Brown, and we doubt their friendship would have survived if the Biebs hooked up with Brown’s ex-girlfriend.
A rep for Bieber denies that the pop star’s relationship with Rihanna has ever been anything more than friendly, but the magazine’s source claims that “Justin would never admit to it; he would never tell anyone he messed around with Rihanna.”

Forgive us for having a hard time believing this ever happened, but this latest rumor does seem to be part of a pattern — a pattern that involves Bieber hooking up with half of young Hollywood.
In November, it was reported that Gomez broke things off because she has “trust issues” with Bieber and their hectic schedules weren’t helping things either. The couple has been known to break up and make up quickly, and RadarOnline reported that one of their splits was over Miley Cyrus.
A source claimed that when Bieber shot the MTV show “Punk’d” with Cyrus in 2012, Gomez was not pleased.
“Selena is repulsed by Miley!” claims the insider, who added that when Gomez brought up her concerns to Bieber, he paid no attention to her and did the show anyway. “He’s been continually choosing work over Selena and she’s finally had enough.”
Bieber also reportedly wouldn’t stop texting other girls, including Victoria’s Secret model Barbara Palvin, whom he is rumored to have dated right after he split with Selena.
HuffPost

Loading...
5 Signs It Will Not Work From The First Date < Previous
This is The Guy Who Makes The ‘Faiba’ Adverts Next >
Recommended stories you may like: