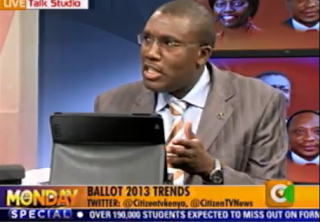 If you’ve been watching Citizen TV’s Monday Special, then you probably know that one politician has appeared on it every week, but this one. Kabando wa Kabando has been TNA’s choice for a representative since the first episode of Monday Special 3 weeks ago. In all those weeks, he has constantly attacked Citizen TV for being pro-CORD. Last week however, he stepped on Royal Media’s last toe, by telling them to their faces, in their studios that they are CORD TV. He argued that since they are Raila’s propaganda tool, the opinion polls they commission cannot be trusted.

Read: Kabando attacks Citizen TV in their own studios

This week, TNA again sent the former Mukurweini legislator as its representative on the show. Citizen was however not willing to have him on air, considering what he would inevitably say. It is however surprising that the station announced that Kabando would be joining them for the discussion, but never let him anywhere near the studio. Apparently, he was seated at the waiting room all along. This was what he wrote on his Facebook page.

Friends, I have been denied entry Citizen studio, despite coming all the way from Mukurweini. Yet, Citizen TV announcing that they’re waiting for me, yet am sitting right inside Waiting room taking. Senior Editor has told me the owners are angry with my last show. That I insulted. Unbelievable.

That led to many commenters to conclude that a late decision was made to bar Kabando from appearing on the show. The strings were probably pulled from the highest decision making level at the station.

Yesterday, TNA wrote to the media council, complaining about the conduct of Royal Media Services and its chairman SK. Macharia.
The party wonders how Citizen TV reported that Kabando had not arrived yet he was right in their premises, patiently seated in the waiting room.
TNA also adds that SK. Macharia’s position in CORD summit is incompatible with proprietor of a media house, and he should immediately quit politics and apologize to Kenyans.

Q&A With KEMSA CEO: How I Will Dismantle Corruption Cartels
Loading...
The Latest