They Want To Kill Me, There’s Something I Have To Tell Raila – Waiganjo Finally Speaks 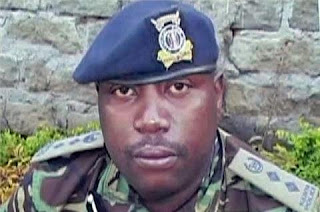 The now famous ‘fake’ police, Joshua Waiganjo, has come out to deny being a fake. The former police reservist gave an exclusive interview to NTV journalist Larry Madowo yesterday, where he claimed to have information that may be reason why he’s been hunted down.

Former police commissioner Mathew Iteeere is on record saying he has never met Waiganjo, and only knew of him last month. However, Waiganjo called Iteere a blatant liar, claiming that it was him who appointed him to the position of Assistant Commissioner of Police (Kenya Police Reservist), Rift Valley province. He also said that he has met him quite often.
Former Rift Valley Police Boss, John M’mbijiwe, also tried to deny knowing Waiganjo, but the latter claimed that he was from a meeting with him at Eldoret’s Sirikwa Hotel, on the same day he was arrested.

Waiganjo told Larry that the police had knowledge of him, and that he got his uniform from a police Quartermaster in Nakuru.

To add more controversy, Waiganjo said that something big is happening and that he will only share that information with Prime Minister Raila Odinga and Vice President Kalonzo Musyoka, adding that he does not trust the police. According to him, senior police officers are after his life, and once came close to killing him while behind bars.
He also said that all the cases being brought against him are sponsored by the force, to portray him in bad light.

Larry asked him about his academic credentials and whether he is a class 8 drop out as alleged. Though he refused to disclose much about his education level, and virtually anything about his life, Waiganjo said he attended high school at a school in Nyeri.
He concluded by saying that he has businesses in the transport sector, where he deals in ferrying goods within Kenya, and that he’ll continue with them after all this trials and tribulations.
Below is the interview

Loading...
Funniest Kenyan Athlete Interview: English or Kalenjin??? ( Audio) < Previous
Margaret Wanjiru: My Degrees Are Not Fake And Kidero Stole My Governor Ticket Next >
Recommended stories you may like: