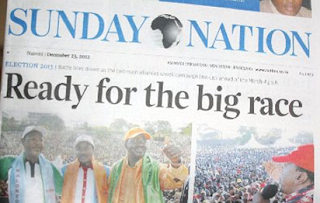 Yesterday, Sunday Nation came under heavy criticism for a Photoshop image which appeared in some editions of the paper. The picture had showed William Ruto addressing a crowd which some hawk eyed individuals identified as the Uhuru Park rally. Both Jubilee and CORD held huge rallies at Tononoka and Uhuru Park respectively, and the paper, as with all other papers had to divide their space between the two.

Some how, Ruto was Photoshopped onto the Uhuru Park rally, in a move many saw as awarding him a crowd he did not attract. Several people who have occasionally stated their belief that Nation Media Group favours the jubilee alliance, and in extension any Anti-Raila force, got their chance to ‘elaborate further’. As the conspiracies were flying in, Nation Media issued a statement, saying that the move was not deliberate and that some of their editions were not affected. The statement in part read,

The impression has been created that an image of William Ruto was superimposed on the picture of a crowd at a Cord rally in the Sunday Nation’s city edition.
We wish to point out that the picture was not doctored at all. Although the crowd that appears in front of Ruto on Page 22 is from the Cord rally, the crowd in the picture on Page 23, is from the Jubilee rally in Mombasa.

…This error did not happen in our Coast and Western editions, which printed correctly. It only occurred in our city edition.

Whether it was a genuine mistake is for you to decide, but at least the the part of the statement that explains that some editions were accurate, is true. We managed to get a copy of both the ‘Photoshop gone wrong’ edition and the right one.

Loading...
Peter Kenneth Tells Off Mutahi Ngunyi, For Telling Him He’ll Lose < Previous
Arsenal Set To Buy Barcelona’s David Villa Next >
Recommended stories you may like: