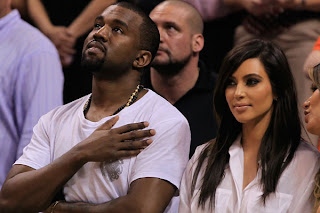 Reality TV princess Kim Kardashian is making like a Middleton, apparently being treated for “acute morning sickness”, just like her royal role model Duchess Kate.
Just weeks after the Duchess of Cambridge made headlines following her hospital visit, Mediatakeout.com reports that a doctor visited Kim at home to treat her for the same condition, hyperemesis gravidarum.
“A physician visited Kim Kardashian at her home to treat her for a bout of what’s being described as ‘acute morning sickness’,” the site reports.
Rumours of her alleged pregnancy to boyfriend Kanye West come only days after Kim’s former lover and infamous sex tape co-star, Ray J, got engaged to model girlfriend Mia Milano.
Other reports claim that “Kimye” are planning to tie the knot in 2013 after her divorce from basketball player Kris Humphries is finalised.
After a long uphill battle to cement their now very public relationship, are Kim and Kanye ready for the next step?
“She wants to be with him as much as possible. They really know and love each other,” an insider told Us Weekly.