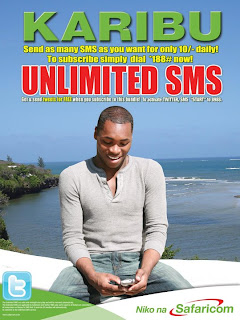 Kenyans were over the weekend shocked to learn that Safaricom has just replaced the unlimited daily SMS with 200 on-net text messages. Thousands who relied on the offer to chat endlessly with their friends took to social networks to express their anger.
Within hours of the move, several Facebook pages urging Kenyans to ‘reject’ the move were created. One page, ‘100,000 Likes Against Safaricom Removal of Unlimited Sms’ had already garnered slightly below 8000 likes by the time of this writing. Among the first post was,

.. and sure enough people liked it, because for a page with only a few thousand likes, over 660 of them like it. The page has since turned into one that attacks the mobile giant’s general services instead of only the unlimited SMS issue. Below are some of the comments on the page.

Please lets be real, safaricom hardly steal any money or airtime. Any lost credit they always account for. So even in times when we get bitter lets not be unrealistic. – Mumo Tom

i got 200 items jana n they were done by noon!nkt

…yesterday i was trying to contact customer care i listened to that nauseating noise unsuccesfully for more that 25 minutes waiting for ‘the next’ available attendant!

The move by Safaricom is coming at a bad time for many Kenyans, since we are approaching the festive season. People who send Christmas messages to their entire phonebook will now have to foot the bill after the 200th message.

Another lot of people largely affected by the move are high school students currently on holiday. They are believed to be some of the greatest users of the unlimited package, having nothing to do the entire day, but chat with friends and forward messages they believe are funny. This lot will have to reconsider their activity, as many of them consume more than 200 messages in a matter of hours.
© nairobiwire.com

Loading...
Jaguar’s Journey To Be Kenya’s Highest Earning Musician < Previous
Nairobi School Whose School Fees Is Sh 2 Million Next >
Recommended stories you may like:

Things To Know About Footballer And Fashionista Eugene Asike
Loading...
The Latest