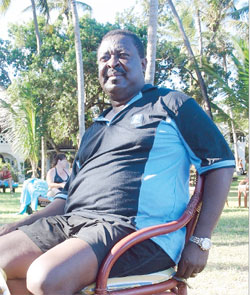 I will address you as a potential future president of Kenya. First I want tell you that I want my president to be a tough guy. You are not a very tough man, are you? Being a president, you will be faced with tough choices which need tough and immediate decisions. The way I have observed you of late, you beat the former watermelon Kalonzo of Tseikuru who has made a tough decision to join his chief nemesis, The Tin God. Why are you fond of whining? You make wrong political moves then start whining. Who cheated you that there is honesty and keeping of promises in politics.Eti, oohhh, they said they will nominate me!oohhh Uhuru said he would relinquish his position for me! hahaha, tell that to the birds sir.. And you had the audacity to say this on national television! You have really disappointed me and all those chaps who had hopes that you were the pawn to be used to defeat the tin god. If you wanted to know more about MoU’s, you should have talked to Raila.He has a doctorate degree in MOU.

If my memory is still clear, the main reason why you left ODM was that you were demanding that delegates choose the presidential candidate. Then you were salvaged into the Jubillee Alliance where they demand that the candidate be chosen through delegates. Now you have turned around demanding that candidate be nominated through concensus.Mr.Mudavadi, are you sure you can run this country through indecisiveness and changing goal posts? You should be tough like Uhuru Kenyatta. By the way I am beginning to like that chat, I mean for comedy show he runs….

Rumors have it that the same people who have led you into your current political mess are the same people who lured you out of ODM. Do you ever learn? After so many years in politics, you are still very naïve and that gullible. If these people were really interested in you, why did they sign their political marriage in Nakuru without you?.I want to remind you that when Uhuru was marrying Ruto, they were fully in love and Ruto knew Uhuru as his only husband. I don’t know of any marriage where there are two husbands for one wife. How on earth did you think that you would just walk into Uhururuto marriage barely had they started their honeymoon and replace Ruto’s husband? I guess you heard how Ruto said he would find it very hard to convince his family that he had acquired another husband. I hope you knew Ruto’s family was against his marriage to his current husband, but he convinced them and they agreed to accept him on condition that he takes care of their daughter and the rest of the family members. You are a home breaker!!!.Let the two love birds be!

Sources had it that on the day you were cheated into this false marriage, you tried to reach Peter Kenneth but he was not picking your phone. We understand he had already acquired Tuju as his wife. We have also been made to understand that you signed another marriage certificate with that prostitute called KANU the same day. Why would you want to marry that prostitute? Do you remember how that prostitute dispatched you into political oblivion in 2002? Why are you so gullible Mr. Deputy Prime Minister? Had you stayed in ODM, I am sure you would be Odinga’s running mate now. He would have gone one term and given you the mantle in 2017.Now see how the vintage Kalonzo is enjoying the honeymoon. Now see how your political life is going to the gutters.Uhuru and Ruto have dumped you, KANU is going nowhere, you can’t go back to ODM.I know Pambazuka coalition may give you a soft landing but it is of no consequence in Kenya politics. You will be rubbing shoulders with the likes of Biwott!gosh!

My advice to you sir, the best you can do is to go back to ODM and see if they can support you to be Governor or Senator of Kakamega County then hope that after Kalonzo finishes his two terms in 2022,ODM/CORD can think about you. But remember this may not come on a silver platter, the way you are used to. There will be the likes of Franklin Bett and a cabal of ODM/WIPER supporters waiting for rewards.

Alternatively you can retire from politics and go growing that Mgombero aphrodisiac in Kakamega Forest. I hear it is the main reason why we had some people doing the unthinkables at Masinde Muliro Gardens. The way things are going with me, I might be one of your major customers in the next 5 years.

I recommend this book by Madame Charity Ngilu (How to be a Watermelon and get away with it).It may be a good read for you Sir.

My Story: I Was An Adopted Child So I Adopted Too
Loading...
The Latest