Why She Is Cheating On You 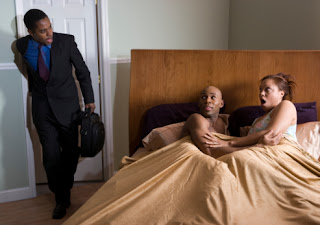 1. You are not fine enough: some girls tend to cheat on their boyfriends with other guys presumed to be finer than their boyfriends. there are girls who melt at the sight of an handsome, tall and well built guy and at that moment, her boyfriend becomes an ‘ex’ instantly.

2. You are not good in bed…there are girls who cheat on their boyfriends if the guy is not good in bed. some go out to satisfy themselves with other able guys.

3. You are broke…there are girls who don’t waste time when it comes to cheating on a boyfriend that hardly provide for their needs. such girls get their needs met by sleeping with rich guys who can give them whatever they want. you can imagine, a guy hardly gives his girlfriend money to take care of her needs, but the girl appears to be well taken care of. she does her hair regularly with Brazilian hair, wear expensive clothes and shoes with designer hand bags, use two blackberry phones, owns an ipad, and she is not working, neither is she from a rich home. so tell me, where is she getting all the money from? From other guys of course. Mind you these guys aren’t father Xmas. And by giving her money and taking care of her, they get something from her exchange (you know nah)

4. You are not giving her enough attention or love…Girls are known to seek and crave for attention and love, and whenever both aren’t coming from her boyfriend the way she expects them, some of them don’t waste time before seeking elsewhere. They do this sometimes to make their boyfriends jealous and also notice them – and you know most guys don’t like competition when it comes to their women. so, in order to get the attention of her guy, a girl can decide to flirt openly with other guys and also cheat on her boyfriend just to spite him.

5. She is a born flirt and love-addict. There are girls like this. who, no matter what her boyfriend does for her, she still cheat on him. Even if the guy is as fine and sexy as Cristiano Ronaldo or has lots of money like Samuel Eto’o, there’s no guarantee she wont still cheat on a guy like that. Coz flirting and sleeping around is already in her DNA. I once knew a girl like that way back in school. she was staying with her boyfriend (who was also a friend of mine in school), on campus. and this guy was a rich dude on campus, a karate expert, from a rich family and with siblings based abroad. was good in bed, and was also taking care of her very well. but despite all of this, the girl was still cheating on him. and to rub salt on the injury, she was cheating on him with guys that weren’t up to the guy’s standard. in terms of looks, built, money, family background and in the area of romance as well. the girl was just a love-addict, who was giving it to every tom, Joystick and harry on campus. the guy eventually broke up with her later, when he couldn’t take it any more.

6. She doesn’t love you..Considering that even those who love their guys also cheat, you can just imagine how much more a girl that doesn’t does it. She’s bound to cheat on him, coz to her she doesn’t owe him anything. Maybe the guy is even the one forcing/begging her to be in the relationship against her wish,or she is just in it for economic reasons. There’s no how such a girl wont cheat on him, since she doesn’t love him…

So, at times a guy may be 100% ok, but that doesn’t guarantee that your babe wont cheat on you, if she wants to. the power is in her hands.
By Marvelic

Life in Crime: I Pulled a Gun on a Pregnant Woman and Felt Remorse For the First Time