“I have decided that I want to be the first Inspector General of police. I am offering my candidature..” Alai 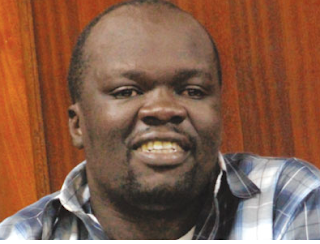 Yesterday, controversial blogger Robert Alai surprised friends and foes when he announced his intention to offer his candidature for the post of Police Inspector General; the first in Kenya. This was his tweet.

I have decided that I want to be the first Inspector General of police. I am offering my candidature. Serious!!

I am requesting all #KOT to rally behind me and let me win this job. I can change Kenya Police.

He then started a twitter hashtag, #Alai4InspectorGeneral, which he then used as a sign off in his subsequent tweets.Some of them included:

I hope that none of the current top brass will feel threatened by my candidature. #Alai4InspectorGeneral

Kenya Police needs a modern well equipped and trained police service. I can do it. #Alai4InspectorGeneral

We cannot have our policemen live like dogs in a cage. We need to value our human resource. #Alai4InspectorGeneral

Within a few minutes, and as is custom with hashtag having Alai’s blessings, #Alai4InspectorGeneral had spread fast. Some welcomed the move with others terming it ridiculous. The following are some of the initial reactions to his announcement.

Unexpectedly, tweeps soon took a different turn. They abandoned the hash tag en masse coming up with an alternative and more interesting one; #CrimesAlaiWouldSolve. Here, Kenyans on Twitter came up with some of the funniest one liners in recent weeks. Below are some of the best.

We will wait to see if Robert Alai becomes Kenya’s first Inspector General, but the strict qualification requirements eg the 15 year top management postition may be his biggest stumbling block