Moha has now taken to his skills to NTV where he is reportedly being offered over Sh 500,000 as his monthly salary, making him one of the highest paid reporters in Kenya. 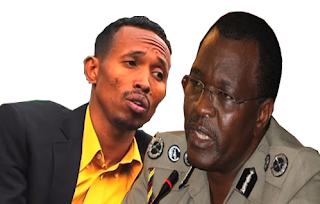 Jeff Koinange finally hosted Kenya’s favourite investigative journalist, Mohammed Ali of Jicho Pevu on his bench. The NTV reporter talked about what he has encountered in his life as a journalist and he sure has a story.
Mohammed Ali recently joined NTV after a long time at KTN where he sharpened his skills in making earth shattering investigative series. Among his most memorable stories include exposing ‘Track It’, the company that was purportedly offering vehicle tracking solutions but was only swindling customers. Track It has never recovered from the story and it is believed it re-branded with a different name. Moha has also done many stories on drug trafficking, recently linking Artur brothers and State House to the biggest cocaine haul in Kenya. For the short period he has been at NTV, Moha has already rubbed one Pastor Njoroge the wrong way, by exposing his ‘miracle’ scam.
Asked which was his most memorable story, Moha says he will never forget the Artur piece. He adds that what he saw during the course of that investigation, is still in his mind. He could not believe that police would kill their own in such cold blood. Moha then tells Jeff of this time there was a Mungiki crack down in Nairobi. He was on assignment in a Nairobi slum and he saw extra judicial killings first hand. Suspected mungiki members were taken to an isolated place and forwarded to a hooded officer who would execute them in cold blood. When Ali approached the scene, the officer demanded to know who he was. Then, Moha was a newbie at KTN and was not very recognizable. When he explained that he was a journalist, he was ordered to leave, only to be recalled later by another officer who told him to side with the police in his reporting. Later that night, Moha was surprised to see that no station reported on the police brutality.
As early as standard 7, Mohammed Ali dreamed of being either in the police force, military, or journalism. Later in life, he would apply for the military and the police but was unsuccessful due to the lack of the mandatory bribe.
He later became an intern at KBC, earning a salary of Sh 3,000. KTN would then hire him and that’s where he polished his skills. Moha has now taken those skills to NTV where he is reportedly being offered over Sh 500,000 as his monthly salary, making him one of the highest paid reporters in Kenya.
Despite the big pay check, Moha is not a happy man. He says that the police have made the force to be one for the rich. They do not address the issues of the common man. He adds that instead of them telling Kenyans why they are being attacked regularly, they sit down and discuss him. He pointed out to Jeff that his sources tell him that the Police Commissioner, Mathew Iteere, CID Director Ndegwa Muhoro, NSIS Director Michael Gichangi and Director of Public Prosecution Keriako Tobiko have had at least one meeting particularly to discuss him.
Jeff pressed Moha to tell him his next project, but the reporter refused to reveal anything. He however said he is working on something big. His parting shot was; whoever killed Saitoti will eventually be known.
You can watch the interview here.
© nairobiwire.com
Loading...
Mbagala Singer Diamond On His Hospital Bed (PHOTOS) < Previous
Anne Kiguta Headed To Citizen TV ? Next >
Recommended stories you may like: