TPF’s Alpha Attacks EABL For Not Sponsoring His Event And Overall Neglect.

“Tusker Project Fame is meant to give you a platform and an audience, not a lifetime support. “ 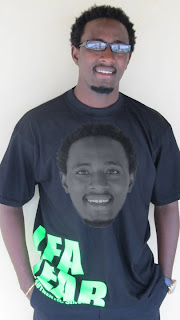 TPF 3 winner, Alpha Rwirangira has written a strongly worded statement on his Facebook account, attacking East Africa Breweries Limited of neglect. Alpha says that EABL is not interested in its artists after the show and he went ahead to give examples of people who have won it but have accomplished nothing else in music. He talks of Valerie from Kenya, Davis from Uganda and himself.
He is particularly disappointed that  EABL refused to sponsor one of his events in Rwanda despite the fact that it was attended by former TPF contestants and even judge Ian. He is angry that EABL gave him a cold shoulder, and he had to look for other sponsors.
Without under emphasizing the weight of his words, maybe Alpha expected too much from a money making company which has already made maximum profit out of him. Tusker Project Fame is meant to give you a platform and an audience, not a lifetime support.
Here is Alpha’s Facebook post.

Am writing this with a lot of pain in my heart. My dearest Fans it is so pain painful. I first thank EABL for introducing us to the music industry. But allow me again to say my disappointments. EABL makes a lot money out of these contestants but still don’t want to support them and care after the show. i would give you examples of V. Kimani, if she was honest and told you the truth with what she went through after the winning of TPF1, Its just a shame , if EABL had been there for her i believe Kimani would be very far with her talent. Look at Ester, its just a shame how so many people dint know about her and they they still don’t know this talented singer, i wish she would tell a story about her path after TPF2, its just full of shame. Now coming to me, its just the same am so sorry to say this after all i have nothing to loose but EABL this is to much you need to support your artists, don’t leave them hanging like lost sheep. All you think its about your selves, its so pain. i remember, i organized an Event back Home in Rwanda where i brought some the artist from different TPFs including judge Ian, and i asked EABL to sponsor my event and they ignored me after showing them how determined i was at least even to be creative and work with them. Its so shameful how i was sponsored by other companies and EABL was not there and yet i had approached them requesting fro a sponsorship like all these other companies, they kept on giving me the dates until the lust min, its a shame and so painful. Now look at my brother Davis, up to know still straggling with his Record deal, EABL i don’t know what is going on with his contract nothing has worked out up to now and now TPF 5 is on, do you think these people are doing justice to the artists? I wander why they are doing TPF5 if they are going to do the same they did to all of us? Its not fare. Please people don’t get me wrong but people vote for their favorite artist and they want to see him grow and when they don’t see what they expected they tend to blame the artist, please allow me to show you the once to be blamed. It is so painful. I have kept this thing in my heart but it’s been time i said it, after all i have nothing to loose but at least let me talk for my young brothers so that they don’t face the same problem we faced. please our lovely fans we need your Opinions regarding this issue.

© nairobiwire.com
Loading...
Manchester City’s Kolo Toure Wedding Photos. < Previous
England Fan Who Revealed His ‘Privates’ For The Camera, Is A Billionaire Next >
Recommended stories you may like: