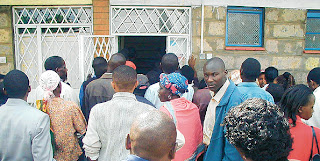 George Donde, the man whose pyramid scheme caused agony to thousands of Kenyans is dead. Donde was the founder of DECI, a pyramid scheme that defrauded Kenyans an estimated 2 billion shillings in 2006.About 90,000 investors had invested in DECI and majority of them lost all their money when it collapsed. Initial investors with DECI like other pyramid schemes had their money at times doubled and this only worked to entice more investors.
When the money became too much, the directors collapsed the scheme and many people lost everything. When the DECI fever was alive, even church ministers were said to be preaching about this new cash cow. The misery that followed its collapse was disastrous with several people taking their own lives. As this was happening, its directors were living lavishly with offshore accounts.
At one point, Donde was held at gunpoint by angry investors in Kiambu, and was only released after he paid them Sh 20 million. Where the money came from in the wee hours of the morning has never been explained.
© nairobiwire.com
Loading...
Kibunjia Asked To Act On De’mathew, Kamande wa Kioi And Muigai wa Njoroge For Hate Speech. < Previous
Philip Kisia Forced To Delete Tribal Tweets. Next >
Recommended stories you may like: