Kibaki Prevents Security From Scaring Doves That Rested On His Feet. 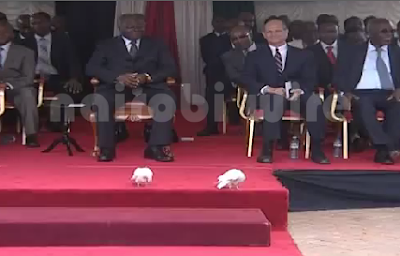 President Kibaki was on Monday opening an SDA library in Nairobi. During the presentations and entertainment period, three kids were given the task of releasing some doves into the air. The doves however refused to fly and instead rested next to the feet of the president. Kibaki’s security was about to kick them out but he prevented them. The two doves stayed there for some minutes.
During his speech, Kibaki said that politicians should stop misleading Kenyans that there is any option of secession. He said that Kenya is one unitary state and it will remain that way. He was most probably responding to Raila’s and Mudavadi’s claim that they should talk to the MRC.
© nairobiwire.com
Loading...
Ocampo Gets New Job At Football Body, FIFA. < Previous
New ATM Theft Technique Gets To Kenya.. (MUST READ) Next >
Recommended stories you may like: