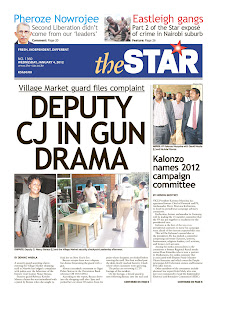 Kenya’s deputy chief justice Nancy Baraza was involved in a gun drama at the village market in Nairobi on Saturday. According to the Star newspaper, Nancy Baraza refused to be frisked while entering the mall despite passing through a desk clearly marked security check. Baraza at some point walked back to her car which was parked a few metres from the security check and came back holding something in her hand. At this point, the lady security guard who had offered to frisk her went down on her knees pleading for mercy. Baraza did not make good her threat though but she clearly made it known who the boss was. Police commissioner Mathew Iteere said that he was aware of the incident and that the police had launched investigations.

Rebecca Kerubo Morara, the female security guard recorded a statement with the police and according to her, the deputy CJ pinched her nose hard and told her to “know people”. Ironically, according to Morara, her father was shot dead in a similar circumstance and for that she was very scared.

Soon after the story became public, the deputy CJ issued the following statement.

In the last few months a number of security incidents have occured in and outside my office. As such, threats of violence have been directed at me and I have had to request increased security measures for my office as well as my own personal security.

The unfortunate incident at the Village Market should be viewed in light of the genuine security apprehension on my part. I certainly had no intention of high handedness, arrogance or ill will.